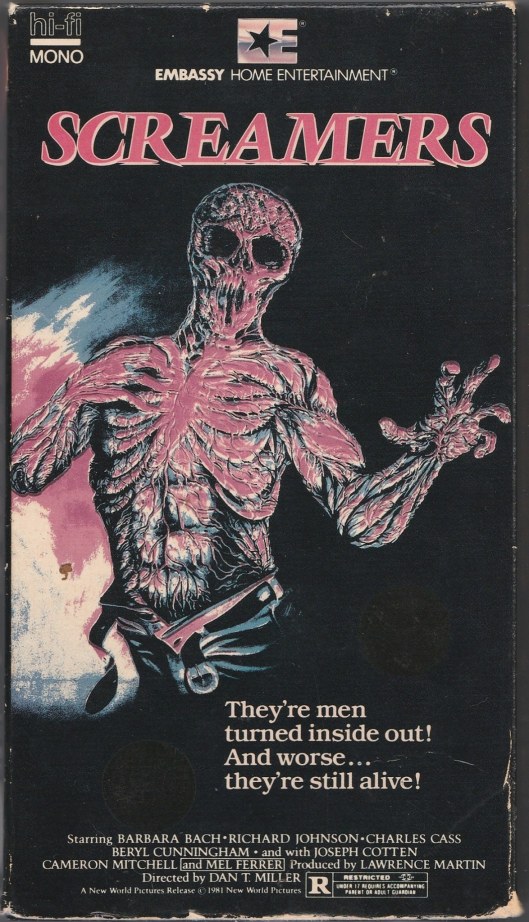 When I was a kid, the box art for Screamers scared the hell out of me. Just look at that guy on the cover! Hell, it unnerved me when I was in my 20s and had to stare at the box all day while working in the video store. I can still remember where it sat on the shelf relative to the cash register. I’m afraid to leave the box on the table now while I’m getting ready to post this, for fear it will upset my son. But somehow I never watched the darn movie until two days ago, even though that picture is the only reason I bought the movie.

To my chagrin I found out all these years later that there’s not a damn thing scary about Screamers. Even the guy on the box isn’t as upset about his situation as I was. I mean, he’s even got the presence of mind to put his pants back on! If someone turned me inside out I sure wouldn’t put my jeans back on, that’d hurt! Maybe that’s why he’s got his belt undone, to ease the pain. But it doesn’t matter, because there are no men turned inside out in this movie.

Screamers is really an Italian movie called Island of the Fishmen, which is basically a Dr. Moreau story about a rich guy (Richard Johnson) who holds a scientist (Joseph Cotten) captive making him turn the island’s natives into fish people so they can swim down to the lost city of Atlantis (in the Caribbean?) and bring up treasure. Both men are totally nuts. There’s some voodoo, and the wife of a Beatle, and a shipwreck full of prisoners. It’s a movie that looks like it should have been made by Hammer in the 50s or 60s, seeing as how it’s set in the 1890s and mostly features people in old clothes running around in a big house with a secret lab. It’s not a terrible movie, maybe a bit boring, but nobody was asking for period piece monster movies in 1979. 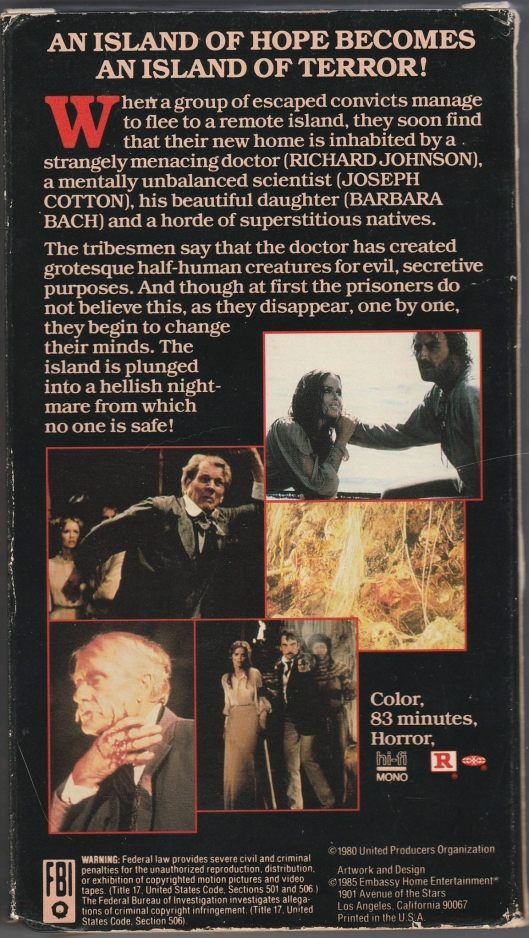 And then Roger Corman got ahold of it and filmed a new opening featuring Cameron Mitchell and Mel Ferrer getting their throats slit by Old Gregg. Then he stuck that onto the front of the film for the drive-in and VHS releases, and filmed a trailer with a woman screaming and something happening on computers. In a movie that was supposed to be set in 1890. To say that audiences were disappointed is putting it mildly. But that cover is the video store industry on a stick. The covers were often much better than the films themselves.

I think what bothers me most of all is that Corman went to all that trouble to film new footage and still lied about the content of the film. If you’re going to add new scenes, why not go ahead and make someone look like they’re turnt inside out? What is the point? You could have just printed the lying box if all you were going to do was bullshit the public. I retroactively nominate Mel Ferrer for the inside out makeup, since his name is in a little rectangle on the front of the box.

The director of Island of the Fishmen, Sergio Martino, actually made some terrific films that should have been hyped. His filmography includes proto-slasher Torso as well as two of the best giallos ever made, Your Vice is a Locked Room and Only I Have the Key and All the Colors of the Dark. But I guarantee you that the film of his that was most known in the worldwide market was this stinky catch of the day. And that’s just slack!