I have never been a big fan of Nicolas Cage. I remember picking up a magazine while bored at my crappy cashiering job in the 90s and reading these great reviews of his performance in a real movie called Leaving Las Vegas, and thinking, “Are they really talking about the nasally guy from Peggy Sue Got Married and Raising Arizona?” I knew even in the 80s when I was 10 years old that he was a weirdo. And so around the time of National Treasure when he stopped being an actor and started being a “personality,” I was so pleased that everyone saw things my way. Therefore, I would never have chosen to make a happy birthday post about him of all actors, but I already decided yesterday to review Pay the Ghost, and then I found out today on Facebook that today is his birthday. And as a bonus, now I will never forget his birthday, because his is the 7th and mine is tomorrow, the 8th. Happy birthday, you crazy bastard. 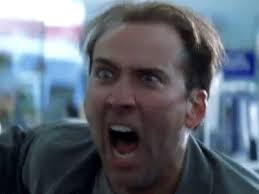 I have to admit, even though it is well known that I will watch any horror movie involving ghosts, I was mostly hoping to see him act like a doofus in this film where he plays a father whose young son has been kidnapped by a haint. Because if there was ever an excuse to go over the top, that would be the situation. And that was how I sold it to my husband as our evening’s entertainment. The trouble was that he never did act like a doofus in the entire film. In fact, about 3/4 of the way through, I had forgotten he even was Nic Cage and was focused on the character. That, to me, is always the hallmark of a decent actor, that I can forget who they are and all the batshit things they have done in real life. If only he would pick better projects worthy of his obvious talent, I could say: Mr. Cage, you win again.

That is not to say that Pay the Ghost is a good movie. In fact, it’s basically Insidious set in NYC. It even features a jump scare where a red and black evil ghost appears over the character’s shoulder. It’s not quite as disappointing, because unlike with Insidious, you knew from the outset Pay the Ghost would be a letdown. Its obvious mediocrity makes it, ironically, perfectly satisfying viewing.  It’s not as good as the pants-shitting first half of Insidious, but better in a way than the carnival funhouse second half. And that’s what these mediocre supernatural horror movies are,  a ticket to one of those low rent fairs that set up for a few days every spring in the parking lot of the Piggly Wiggly. You know what you’re getting, and you’re entertained while you’re there, but in the end you realize you spent too much money for what you got. And you also know that next year your butt will be right back out there riding the Gravitron.

There’s one thing that always bothers me about scary ghost movies, and that is: why does no one ever think to seek spiritual intervention? I know lots of people are atheists these days, and that’s fine. But at the point when your kid has been stolen by a damn ghost you have to realize that hello from the other side, there is something out there, and you might want to call a priest, if only so you can make a large donation to the church and send him across the bridge into hell because that’s sort of his line of work. Of course, there are those who think that Cage himself is God, so they should be super happy with him fighting evil spirits and everything’s fine.

Also, if a person’s whole body goes into the afterlife, and they die, does their corpse then fall out of a ceiling somewhere in Cuesta Verde Estates? This has always bugged me. 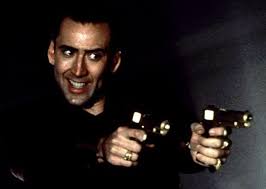 If you like supernatural horror, you can find Pay the Ghost on Netflix and it won’t really piss you off too badly. Just don’t do what I did and follow it up with a good movie (The Taking of Deborah Logan), because it will suffer all the more in comparison.

4 thoughts on “Pay the Ghost”