Lacey and Willy are a pair of grown siblings with a special bond: when she was three and he was a little older, they killed their mother’s abusive boyfriend. I say abusive; he was abusive to Willy, tying him to the bed and gagging him. Their drunken ass mother was okay with her man’s behavior as long as it got the kids out of the way long enough for her to get her swerve on. Willy hasn’t spoken since, but Lacey has grown up to have a small family and be as normal as possible other than the occasional nightmare. Unfortunately their mother, who they haven’t seen since the night of the murder 20 years ago, just wrote them a letter, and now Willy is acting even weirder than usual. Lacey’s psychiatrist, played by the ubiquitous John Carradine, advises her to visit the house where they killed the guy. Bad idea, but so was having John Carradine as your shrink, if you’ve ever seen a horror movie.

Lacey and her husband visit the former residence and find that the mirror that was hanging over her mother’s bed during the murder is still in the house, and now it reflects the ghost of the angry man Willy stabbed as a kid . Lacey smashes the mirror, which lets him out. Her husband becomes seized with a weird desire to bring the mirror and all the pieces home with them, but one piece stays behind, making sure all the kids living in that house kill themselves or die in weird ways. Everywhere a piece of the mirror goes, people die horribly, even if a small shard somehow sticks to the bottom of a shoe.

To say that the plot of The Boogeyman is goofy would mean I’d have to start over and re-examine eight years of reviewing supernatural horror movies on my blogs, not to mention a whole life spent watching them, so I won’t do that. What I will say is that this is one of those movies that I enjoy for the death scenes, and then I mentally check out of for the rest of the movie, which is S-L-O-W. There are long scenes of people doing mundane household chores and/or staring into space. It does help that Willy and Lacey are played by real-life brother and sister Nicholas and Suzanna Love, which lends some acting success to the proceedings since they didn’t have to stretch to act like brother and sister. Another positive is that the soundtrack is really good, a mix of weird noises on a keyboard being something that rocks my socks every time.

The Boogeyman is one of those movies that you watch when you’re in the mood for an 80s slasher and think, “Oh good, here comes the part where the girl kills herself with scissors; here comes the part where the guy gets a screwdriver to the back of the head.” That’s the whole point of watching this, just to get to the ridiculous deaths. You could theorize that the killings are caused by a poltergeist manifestation of Lacey’s guilt for cutting her brother loose with a big ol’ knife (and then handing him the knife) after her mother’s boyfriend tied him up, but it’s more likely accurate and literal that a ghost just comes out of a mirror and does whatever it feels like such as making a bunch of forks and knives fly through the air and stab a priest in the back. I thought that part was funny, not because I’m anti-priest, but because forks are not the most menacing of weapons. It didn’t help to stave off the hilarity when right before that scene Lacey gets possessed and says that it’s good that her aunt and uncle were just killed by the ghost because that means she has fewer people to cook dinner for.

I do think one purposeful artistic choice was to have all of Carradine’s scenes take place in front of a large mirror, but I don’t know what it represents. It’s just too odd a choice in terms of the set dressing to be a coincidence.

As a curiosity, Jane Pratt, editor of the 80s teen mag Sassy, supposedly plays the girl who cuts her own throat with scissors. I say supposedly because the girl in the movie doesn’t look a thing like the Jane Pratt of Sassy to me, but it’s on her IMDb page. I wish I had kept all my old Sassy magazines. I just loved the work of their writer Christina Kelly. She made me want to be a journalist too, and I was one of a sort for about two years on the college paper until my editor asked me to call a fellow student’s family up at home and ask for a quote on their recent personal tragedy. Then I realized maybe reporting on the news was not for me (I didn’t make that call, BTW). No one would now pay me $1 per column inch in 1994 money to talk about such topics as how irrationally angry it makes me when people’s names end in “y” when they could end in “ie” (I’m cringing every time I type the word “Willy”) but at least here I can write about whatever I want, including such trivia as this: Willy and Lacey’s drunk and horny mother says in her letter that she lives in Monroe Georgia, and the worst roommate I ever had was also from Monroe Georgia and was also drunk and horny. Coincidence? 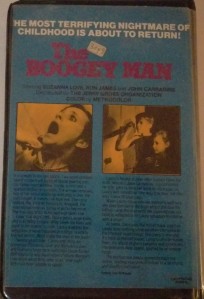 My VHS copy of The Boogeyman is notable for being a Wizard video tape release in the cut up box of a Lightning Video release. I could probably get a Wizard box, but it’d be a bootleg, and would cost about $20. I will stick with the frankentape for now. Like many of the films in my collection, you can find The Boogeyman on Shudder.