The M.D. stands for Medical Deviate! The trailer tells you this, along with spoiling the movie as to the identity of who the big bad is in Dr. Butcher, known in its native Italy as Zombie Holocaust. I have a slightly valuable copy of this in that I could probably get 25 dollars for it, but I particularly like collecting Paragon VHS so I’m keeping it. Other than that, there is nothing to recommend this movie. There are other places to see naked women, a mad scientist, people being eaten by guys in loincloths, and Ian McCulloch being action-y, although I admit I was impressed with the scene where he took out a zombie with an outboard motor to the face.

My husband and I have a nightly viewing habit that he likes to call “Roku Roulette,” in which we go through all the free channels (and there are a ton of them if you count all the ones under the Filmon umbrella) that show lo-res copies of old horror movies they probably don’t have the rights to, and then give up on choosing something, put on an MST3K, and fall asleep. But the one movie that will stop me spinning the wheel of crap every time is Lucio Fulci’s Zombie. Especially if we catch it right around the point where the zombies are having a buffet of Olga Karlatos in her living room, I am compelled to watch until the end even if I just saw it last night. We even once drove an hour to watch someone screen a DVD of it at midnight in a theater with a bunch of drunk people. And all that is to say, as much as I love Zombie, I have never once thought, “I tell you what, I wish Ian McCulloch would go back to that island with a worse actress and encounter some zombies that don’t even eat people. Let’s call his character Peter again! Also, I’d give anything to just get a step by step explanation of exactly what Richard Johnson was doing to make those zombies, only let’s have him played by a different actor too.” 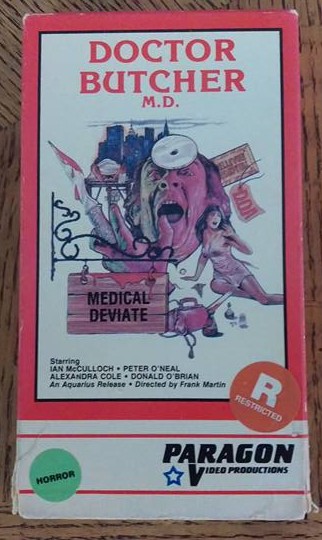 Yep, Doctor Butcher is just Zombie rehashed and made even more stupefying. People think that Fulci ripped off other filmmakers, and he did, but when you get into the echelons of Italian horror he and Argento are tied for the second tier, right below classy old Mario Bava. It gets so much worse than the three of them. I mean, we all have our favorite schlocky directors; I am a particular fan of Joe D’Amato, but I wouldn’t show one of his films to someone who only watches horror movies on Halloween, if you know what I mean. However, I would show that hypothetical person a Fulci film. (I say hypothetical because people stopped asking me “what’s a good horror film now that it’s October” years ago, for some reason.) The best thing Butcher’s director Marino Girolami ever produced was, indirectly, the work of his son Enzo Castellari, despite having apparently helmed 77 pictures himself. Watching Doctor Butcher is like you took a sharp clear image of the VHS of Dawn of the Dead, saved it as a PNG file if you will, and called it Zombie, and then screenshotted a JPG from a YouTube video of Zombie and put it on Instagram with a filter to make it look like a Polaroid called Doctor Butcher. Oh yeah, and then poorly photoshopped in some of the cannibals from Eaten Alive or something.

I guess I should synopsize this even though you’ve either already seen it or understandably don’t give a shit. Alexandra Delli Colli is a medical assistant in a New York teaching hospital where cannibals have been stealing and eating parts of the cadavers. She’s very sketchy herself because she was raised on the island the cannibals hail from, and owns a knife that is used for human sacrifice. She passes these quirks off as an interest in anthropology, but says the time on the island was the happiest of her life. McCulloch works for the Health Department, and is dispatched to the island to find out more about the cannibals. A reporter and her boyfriend are sent along as snacks. The group meets up with an expat doctor who we’re not supposed to know is an evil scientist, but the trailer already revealed it, like I said. He sends his assistant, Dakar, with the New York party to another island so they won’t discover that he is making his own zombies out of cannibals in failed attempts at brain transplants, but McCulloch is just too smart for him and insists on visiting the right wrong island, so that he can end up strapped to a table in threat of losing his brain. Delli Colli strips a lot, for obvious reasons, and becomes queen of the cannibals so she can deus ex machina the heck out of the ending. Yes, let’s use the cannibals, who do eat people alive, to defeat the zombies, who are vegan and would rather just kind of lunge at everyone. But at least Ian McCulloch lives another day so he can go to space and discover exploding alien eggs in Contamination. 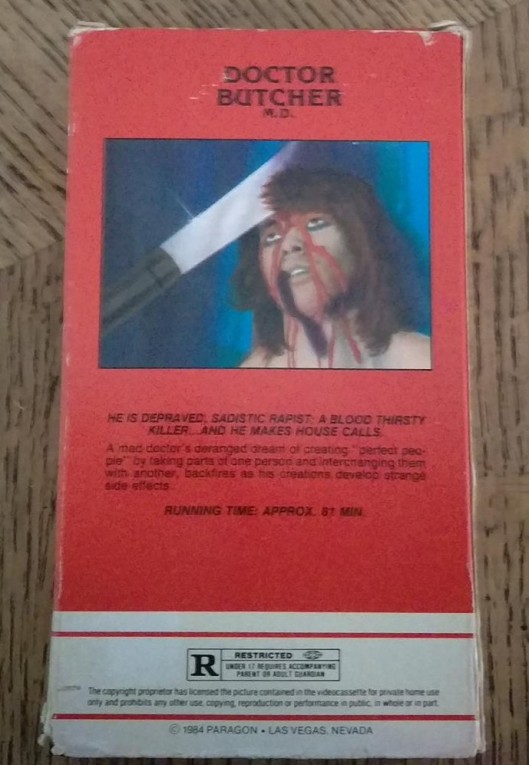 At no point does he make a house call.

I know Doctor Butcher, Donald O’Brien, mostly from too many viewings of 1988’s Joe D’Amato/Umberto Lenzi mashup of Evil Dead and House By The Cemetery, Ghosthouse. By the time Ghosthouse came along O’Brien had suffered a head injury (in 1980) and had a little trouble moving around but was still able to portray a nasty villain. It’s a sad reminder that we’re all a fall, or a rogue brain surgeon, away from being impaired, but with a little luck and a lot of gumption you can go right on making bad movies. I would never be so crass as to imply that a knock on the head would make you like Doctor Butcher better, but I will say that this is even worse than Hell of the Living Dead and should be watched only by those who have seen every other Italian horror movie except for maybe the unofficial Zombie sequel with Jeff Stryker, or the Ruggero Deodato joint about horny sisters and a murderous washing machine. Or just go and watch Zombie again.