This action series starring Lorenzo Lamas begins with Lamas’s character, a former marine known as Soldier, screwing up an undercover drug bust on his first day by booby trapping the crack house where he’s waiting for death merchants to sell him some drugs. When he gets thieves instead, he makes the floor flip over so that nails go through their feet. This really pisses off his boss, who happens to be Larry Csonka. That’s never a good idea! The new rookie gets fired even though booby traps are a pretty neat trick. Soon Lamas is off doing what he does best: looking vaguely confused while riding a motorcycle.

Meanwhile, in another movie, an older couple and their teenage daughter are set upon by sadistic rednecks while cruising on the river in their houseboat. Let me just say, since I like to vent all my neuroses here on this seemingly neutral movie blog, that I hate home invasions in film, even houseboat invasions. And I am aware that Snake Eater ain’t no Cape Fear, yet this whole section of the film bugs me. Vampires, zombies, ghosts, even slashers are probably not going to happen to me, but a break-in could. The idea of assholes breaking into your house for no reason, boiling your wife’s head, kidnapping your daughter, and then knocking you out and leaving you to die as your boat explodes just doesn’t entertain me. The old man looks so defeated waiting to die in his cute little ball cap that says “Captain” on it, knowing he couldn’t protect his family, that I forget this is not to be taken seriously.

And by the way, the victimized family is of course Soldier’s parents and sister, as we find out the next day while he’s being beaten up by bikers in a bar somewhere. In this particular bar everyone indeed knows his name, but his friends all decide to step back and let him take care of the bikers. He is known so well that the police know to look for him there to deliver the bad news about his family, even if no one likes him enough to help him fight off bikers.

“Nothing about this film is as dangerous as Deliverance.” – Ned Beatty

Soon our hero is off to catch the Wyatt family and rescue his sister, but first he’s got to meet Ronnie “The Hawk” Hawkins, who I didn’t know was an actor because I’ve only seen him playing music in The Last Waltz with The Band. Hawkins plays a marina owner named King who rented the houseboat to Soldier’s family, and he also has a hot daughter of his own, luckily, since she saves Soldier from getting his ass kicked again by the River Bottom Nightmare Band. Then while he’s passed out from his latest beating, she decides to put him in her bed and go take a shower, which gives him the perfect opportunity to leer at her naked when he wakes up.

While Soldier was sleeping off his concussion, Ronnie Hawkins has made his Harley into a jet ski, so now he sets off down the river to kill all the hicks. At some point I lose interest in this movie every time I watch it (nothing personal, cause most bad movies have me checking the clock in the last half hour) so I couldn’t tell you if he uses any cool booby traps in the final showdown. It really doesn’t matter to me because I see Snake Eater as just a setup to one of my favorite good-bad movies of all time, Snake Eater 2: The Drug Buster. Suffice it to say that here in Snake Eater land the good guy wins, more or less, and then there’s an epilogue starring Ron Palillo as an arsonist who Soldier has to catch. To be fair, this isn’t even the weirdest movie I’ve ever seen featuring that guy. That would be the South African head scratcher Hellgate which also came out in 1989, and which features a talking head in a fridge. 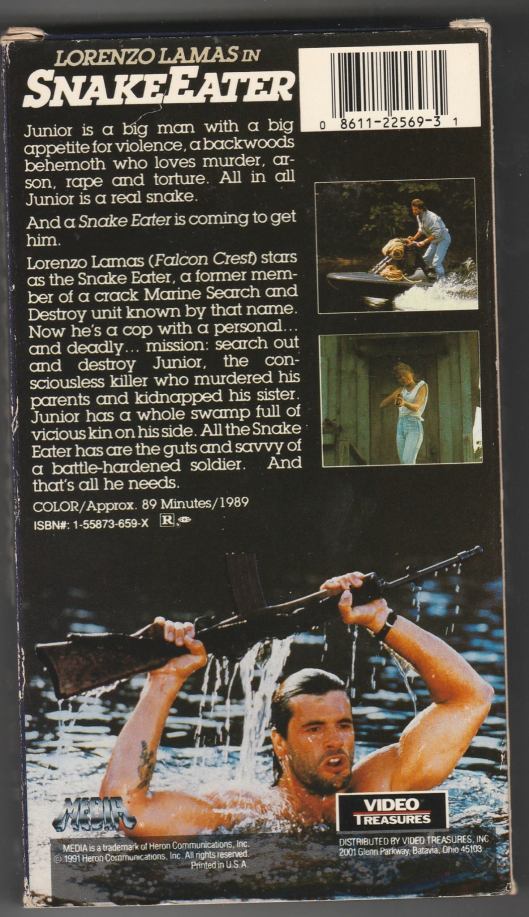 But let’s talk about Lorenzo Lamas again. Ron Palillo is also in Snake Eater 2, so maybe they were friends? Maybe they met through John Travolta during the making of Grease. More importantly, why does Mr. Lamas look so awkward and uncomfortable in every low budget action film he churned out? (And for that matter why were they all made in Canada? I totally have an agent but you wouldn’t know her because she lives in Canada?) I have never seen such an attractive person look so ill-at-ease on camera, so for that reason he fascinates me. Forget about Are You Hot?, he should have been a judge on Are You Nervous?! The only time he looks like he can act is when he’s getting his ass kicked, which happens a lot to him here for someone who’s supposed to be a dangerous special forces dude. If you don’t know what I’m referring to, watch this goofy slow motion running action that ensues after they find the love interest’s dead dad. I think if I was Sandy I might pick Danny Zuko over him too, because at least Zuko could dance. Lorenzo does a good job making smart remarks, and he would appear to have the physique of an action hero, but I think he might have been more comfortable in comedies.

My copy of Snake Eater has logos from both Media Entertainment and Video Treasures, which means the title was probably owned by Media but Video Treasures had the rights to put out cheapo EP copies. I could probably find a better quality tape, but like I said, this one is not one of my favorites. If you’re going to set up a horrible murder, make the revenge worthwhile, not forgettable. The best thing this movie has going for it is that there is a theme song that references the plot of the film with lyrics like “Solder, where’s your sister.” More movies should include theme songs that reference the movie’s plot. But if you like B-action movies you should not miss Soldier in part 2, where he gets himself checked into a mental hospital to escape prosecution for his bad police work and all sorts of sophomoric high jinks occur. It’s actually pretty funny, which is what works for Lamas. Anyway, my favorite part about my copy of Snake Eater is that it’s an autographed copy! Not by any of the cast, but by the previous owner! This is what you kids today are missing out on by not learning to write in cursive. Juanita Jones, wherever you are, your handwriting is hot!