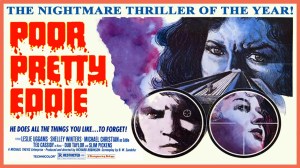 I don’t like rape/revenge movies, and I usually don’t like movies about scary hicks. I didn’t know what I was about to watch; I just knew that Poor Pretty Eddie was made in ’75 and that it was filmed in the town in which I spent several of the best years of my life, Athens GA. Shame on me for not looking up the plot before I ordered this one from Netflix.

Worst of all, I liked the movie. Goddammitsomuch.

Famous African American jazz singer Liz Wetherly (Leslie Uggams) goes on a driving vacation by herself through the south and has the misfortune of breaking down near the lodge owned by crazy, pathetic, delusional Bertha (Shelley Winters) and her equally crazy younger boytoy, Jesco White impersonator Eddie (Michael Christian). Every southern stereotype is rolled out, but in an unusual way, as if David Lynch himself had come down to Tobacco Road. For some reason Keno (Ted Cassidy) also hangs around the place taking orders from Bertha and puts up with a bunch of crap, and finds solace only in keeping a dog whom he loves very much. You know what happens to beloved animals in horror movies.

Eddie rapes Liz, after an uncomfortable dinner party and a forced listening to his “music,” then convinces himself the two are in a relationship. Liz’s torment, kidnappings, and multiple insults and assaults by Eddie and the backwards racists he hangs out with go on for days.  Even Sheriff Orville (Slim Pickens) and Justice of the Peace Floyd (Dub Taylor) make a mockery of her attempt to file charges, holding an impromptu court session in a dive bar. Finally, Eddie plans a wedding for himself and Liz, complete with a dress stolen from Bertha, but Bertha crashes the wedding in spectacular fashion, also in a wedding dress.

It is super important to note that at no point in the film does anyone ask Liz to sing once they have her under their control. She only sings in the opening scene, before her vacation, when she is still a free individual. You would think, given that Eddie and his associates have at their mercy a famous singer, they would at some point have commanded a performance, especially in light of the fact that there are several live musical performances by other people depicted.

There are two reasons for this omission. Eddie’s reason, symbolically, for not asking her to sing is because, in raping her, he has taken away her right to consent, her integrity, her voice. As for the others, they are so horribly racist that, symbolically, they don’t even realize she has a voice. Being able to sing would be emblematic of her right to speak out against what is happening to her, like the metaphorical songbird/testifying witness in court, but because they don’t consider black people to be fully human, they don’t even think she should have a say.

This is drive-in trash, no doubt, but it’s elevated trash, both by the artistic way it is shot and by Shelley Winters’s acting. There’s excellent use of a happy country song about a one night stand (something about “you don’t have to say you love me in the morning,” for contrast) during the rape scene, which by the way is intercut with hound dogs mating while yokels stand around watching. That has got to be a first and only.

There’s a nice minor key version of “Here Comes the Bride” when Eddie is telling Liz that she is getting married to him. There’s also a great scene earlier in the film when he is forcing her to take pictures of him by a dam and she begins to see not Eddie posing through the lens, but shotgun blasts ripping Eddie apart. In fact, as soon as I saw Liz taking pictures with her beautiful Nikon, way back at the beginning of the movie before even the first rape, I knew it was a foreshadowing to her revenge. She looked empowered with the camera, and I thought of other words for taking pictures: shooting, grabbing, capturing.

The rape scenes mercifully don’t show much, and Leslie Uggams is never more exposed than having her shirt torn open to reveal her bra. If the rape scene had been an I Spit On Your Grave special I would have turned the stupid movie off. Also, we’re told, and not shown, what happens to the dog. So even though I was uncomfortable all the way through, I was able to stand it while waiting for a payoff at the end, and I got one, although not quite as I expected. Liz gets her revenge, but so does Lurch. In slow motion, with a beautiful version of “Amazing Grace” playing. For fans of sublimely ridiculous trash, this movie is not to be missed.

Poor Pretty Eddie played the drive-in circuit for ten years, and was many times recut and retitled and rereleased. It was made by erstwhile pornographers Richard Robinson and David Worth, and I think we’re gonna need a whole category around here for smut makers who jumped into horror cause they figured anyone could do it. The movie taps into all the fears about hicks. It’s just not very accurate, especially being set in Athens, which is probably the most progressive town in the south. I know you know we’re not all like that, and although I’m sure there are hicks this scary somewhere in the world, in my opinion what you’ll find down here at worst are people who just don’t feel the rules apply to them in terms of car emissions, fireworks, leash laws, the laws of fashion, and sometimes the laws of physics.

But let me just ask one favor: if you’re thinking of making a killer hick movie, could you get the speech patterns right? There’s a character in this who threatens someone that he’s gonna “kick a mudhole in his backside and stomp it dry,” when everyone knows it’s “stomp a mudhole in his ass and walk it dry.” And for the last damn time, “y’all” is a PLURAL pronoun. Thank you.